It’s been almost one hour since we’re waiting in the middle of nowhere to finally see the Northern Lights. It’s quite dark. About 20 cm of snow on the ground. Nearly 9 pm. Our plane back home kicks off in 12 hours. I’m having my first doubts… Maybe three nights in Norway is not enough to see Northern Lights? I recall people who went here just for a weekend and they have experienced the phenomenon of aurora borealis. But I remember those who have stayed for weeks and ended up without success, as well. Am I going back home disappointed? I keep in mind three amazing days here, but deep inside I know it’s not why I came to Norway.

Seeing the Northern Lights was one of these dreams that I always had. When I decided to make the dream come true in January 2017, I almost immediately started to have a gooseflesh just thinking about it. So it’s decided – now or never! But where to go? Norway was the most obvious choice. I always wanted to go there in the summer, anyway. This would be a good chance to prepare myself for that – I thought, as this is one of the most expensive countries in the world. Choosing the exact place was also easy. It took me only a few minutes to Google for Tromsø, a charming town above the Arctic Circle.

It’s snowing in Tromsø during our first evening, but it’s not too cold. Storgata, the town’s main street in the late January’s evening seems to be abandoned. It’s easy to spot Norwegians in their houses, as they have enormous windows and apparently don’t use blinds whatsoever. Empty streets with all these Christmas lights and colorful shop displays look absolutely magical. We’re walking around, visiting the harbour and having a good time. Unfortunately it’s constantly snowing and there’s no chance to see the Northern Lights due to a sky full of clouds. Let’s try another night! 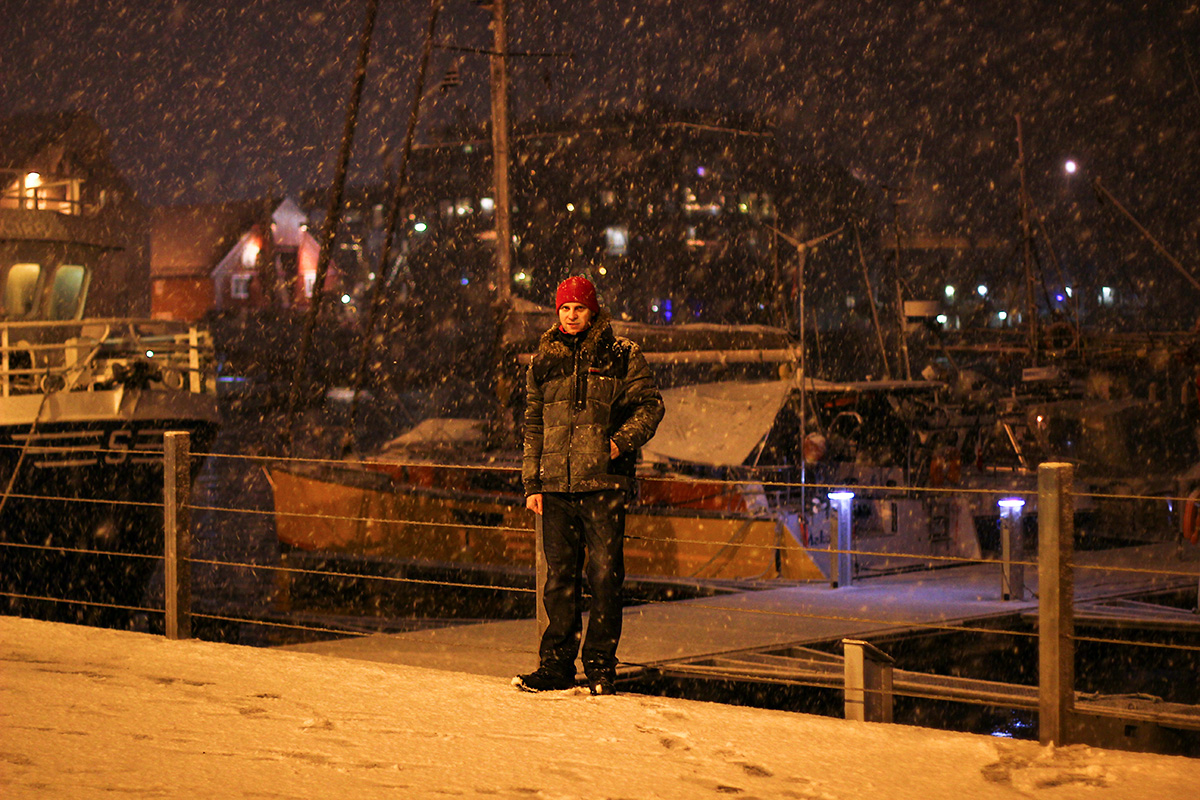 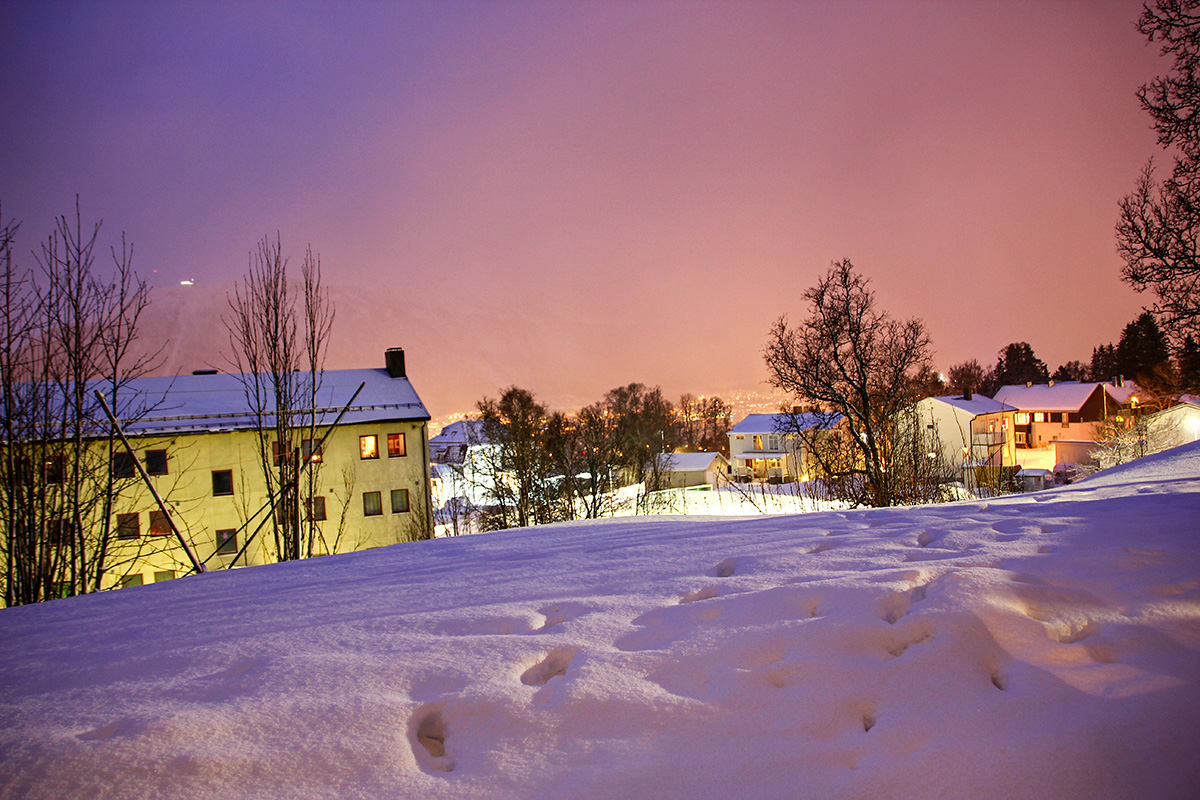 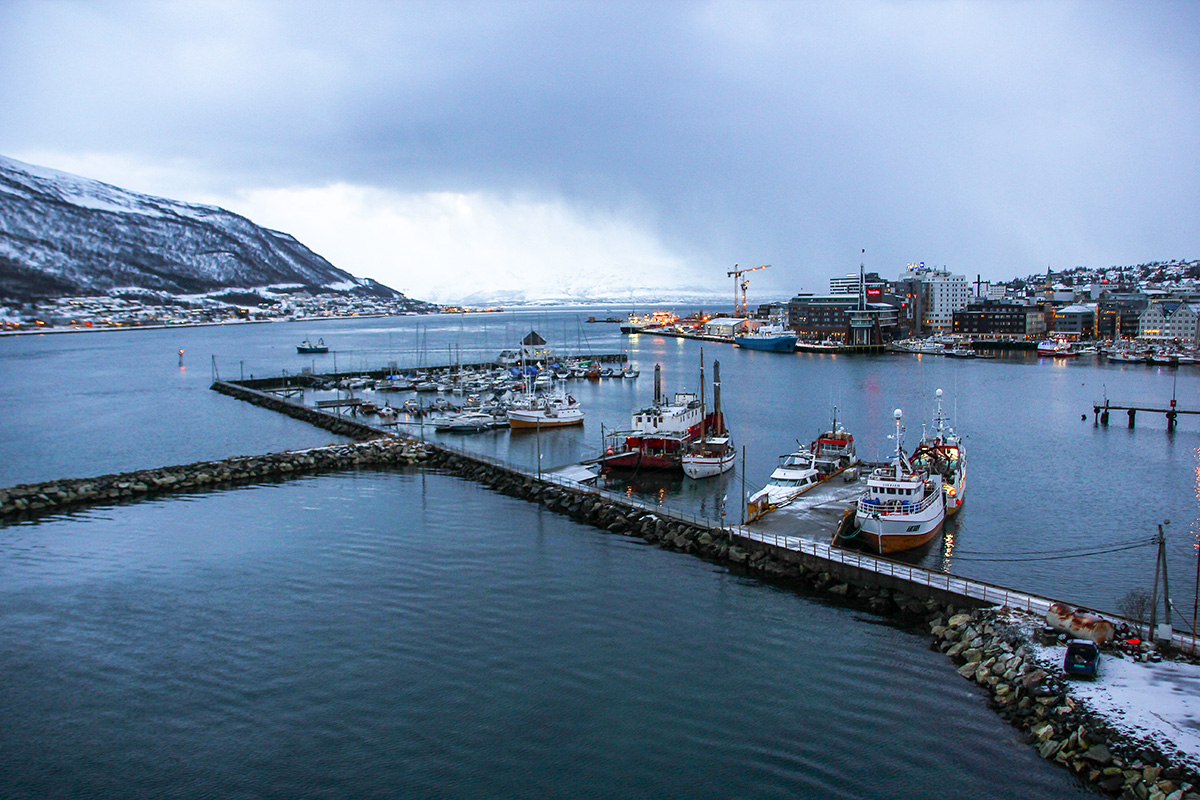 We start our first full day here discovering that Tromsø with its snowy hills and Nordic architecture looks magnificent. It’s a polar night, but actually it’s not too dark. For 3-4 hours it looks like a normal day just after the sunset, but with grey sky. It’s kind of weird, but we like it.

We spend our time hanging around; visiting shops, free-entry Perspektiev Museum, and even witnessing Polar Night Halfmarathon! Then we visit Tromsø’s arguably biggest attraction, which is a point view on Storsteinen Mountain. It’s quite a distance from the town center to the Fjellheisen Cable Car which takes you up there. The weather is mild. We decide to walk instead of having a bus. We’re passing the bridge and the Arctic Cathedral. Finally we approach the station. Cable car is a nice and fast, but wait for the view from the top!

It’s breathtaking on the Storsteinen Mountain. We can see not only the whole town, but also the mountains and the waters around. After a while the strong wind and snow start off and we have to hide inside the station immediately. The day is changing into so-called “blue hour” until it’s getting completely dark. The view behind the window is also changing. I’m taking more pictures. Later we take a bus back to the town centre and hope to see the Northern Lights.

In the late evening it’s not snowing anymore, but the sky is full of clouds again with not even one small window to see something above them. Third time lucky, let’s try another night! 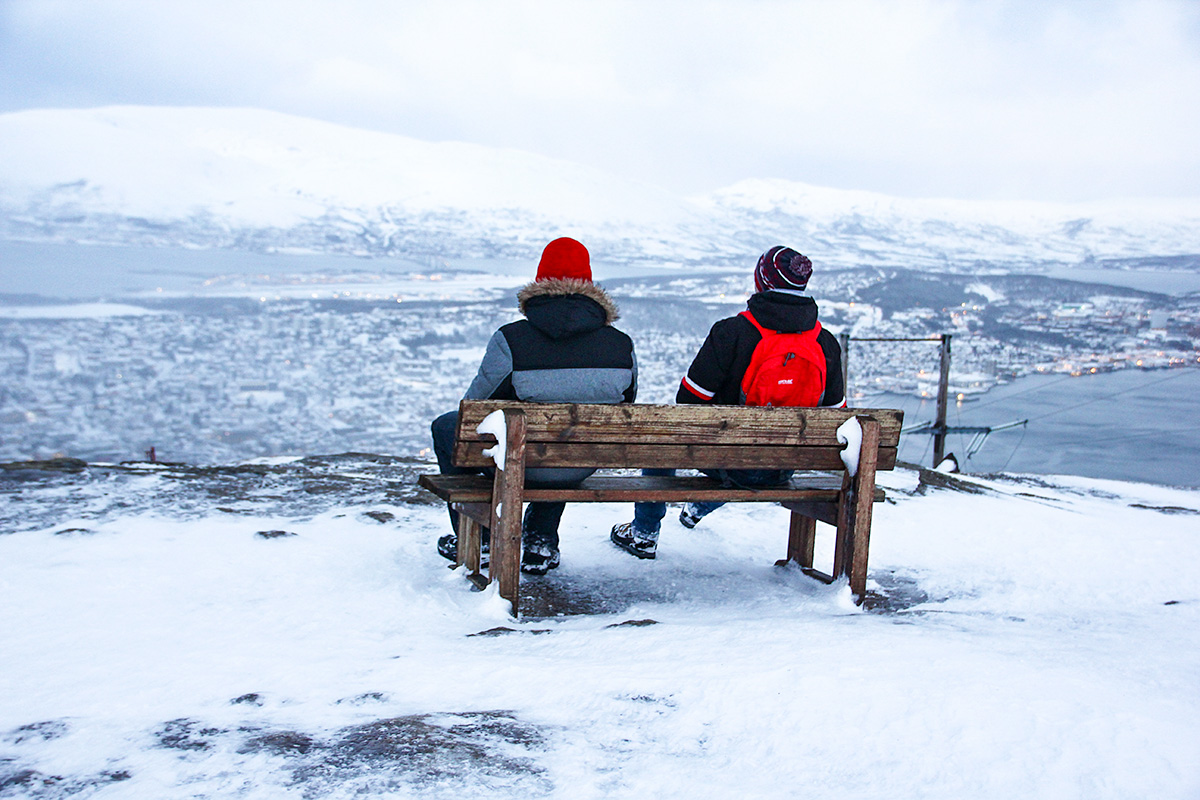 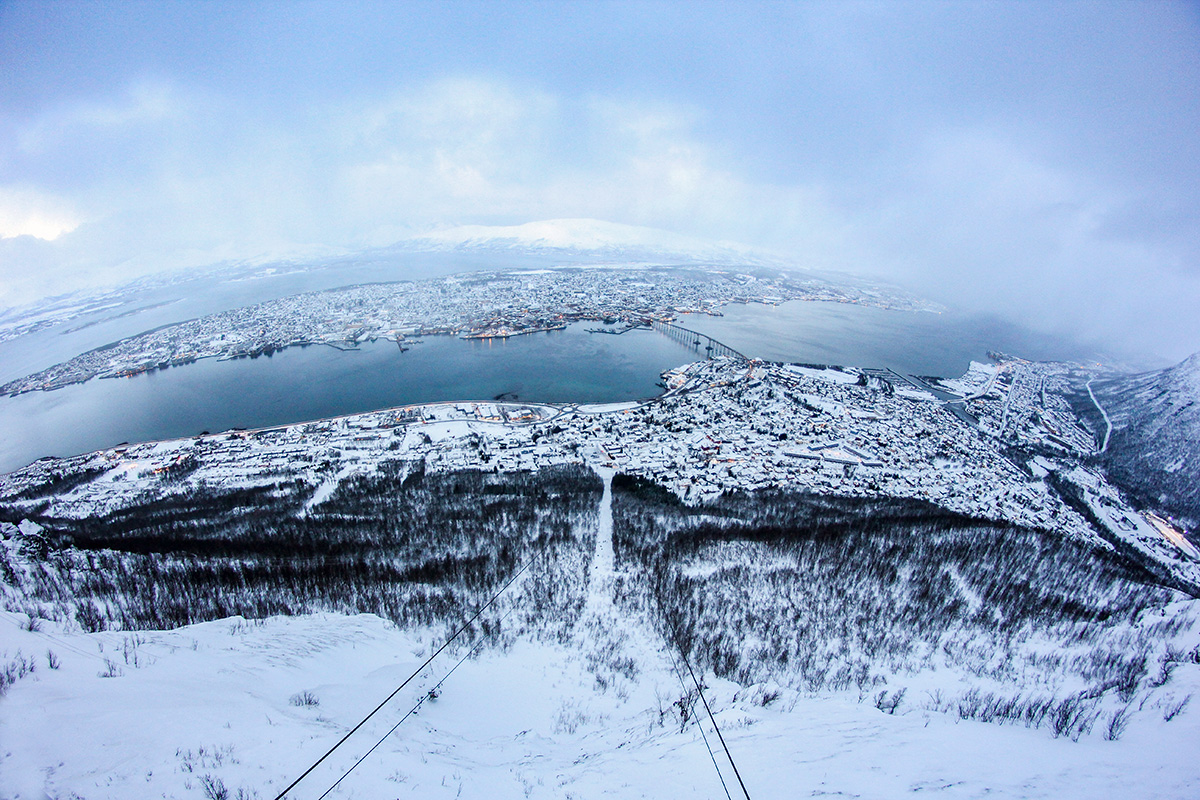 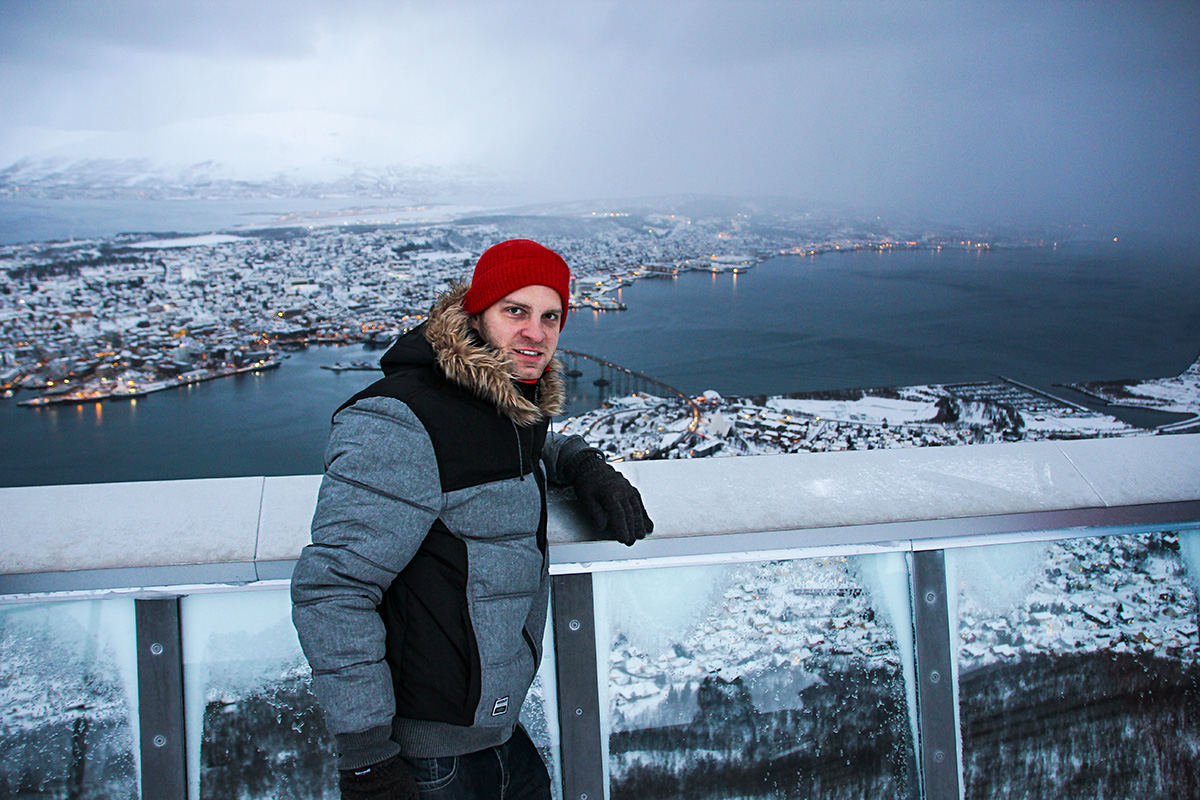 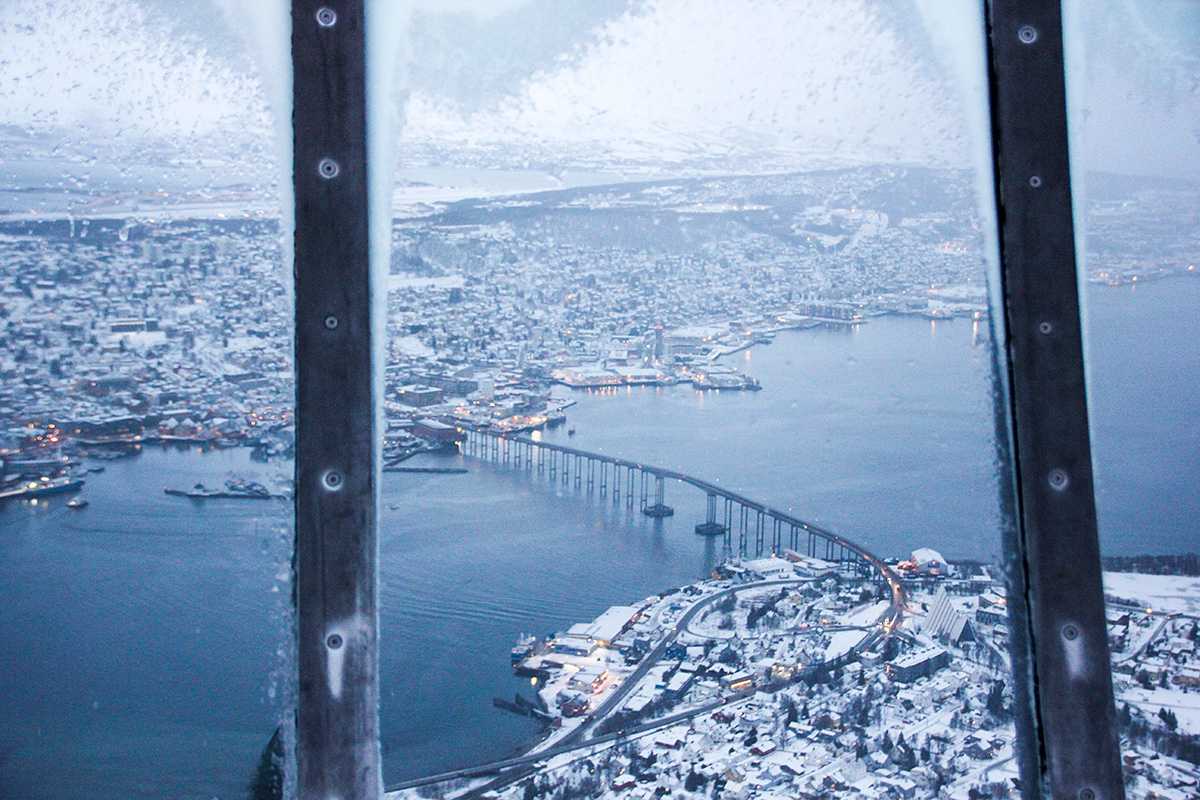 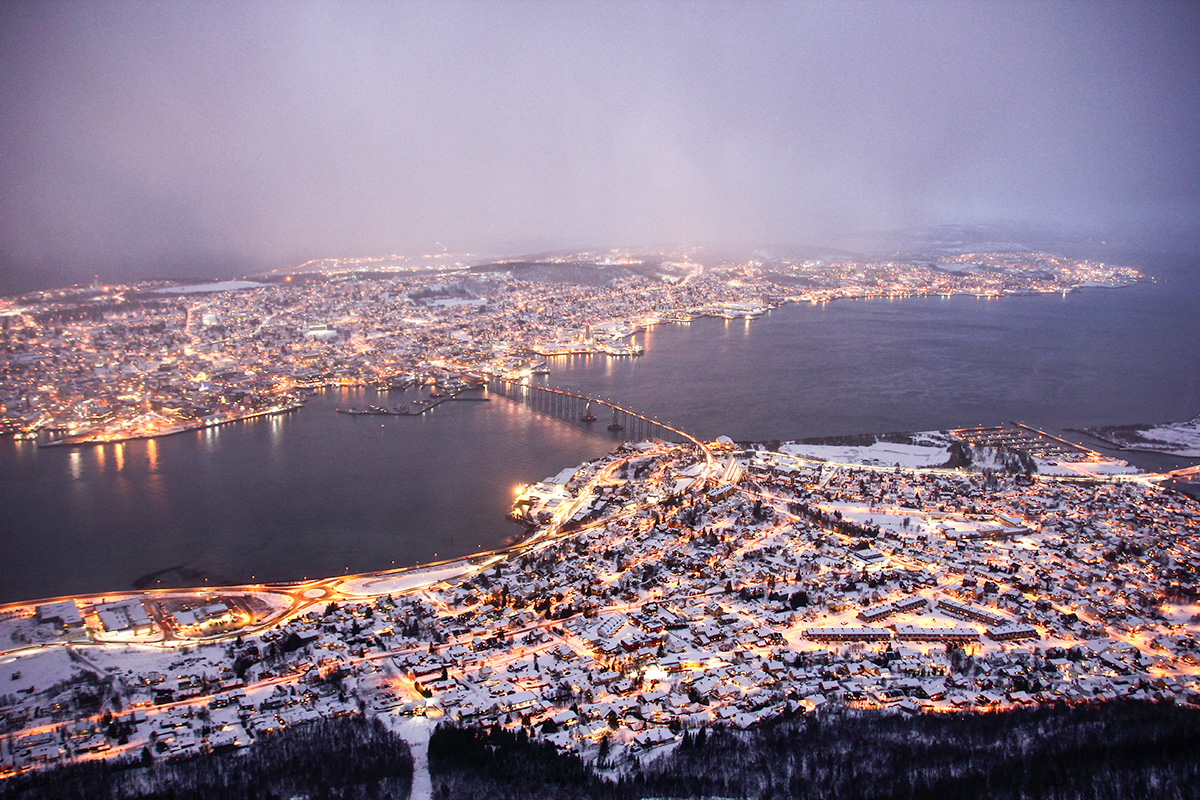 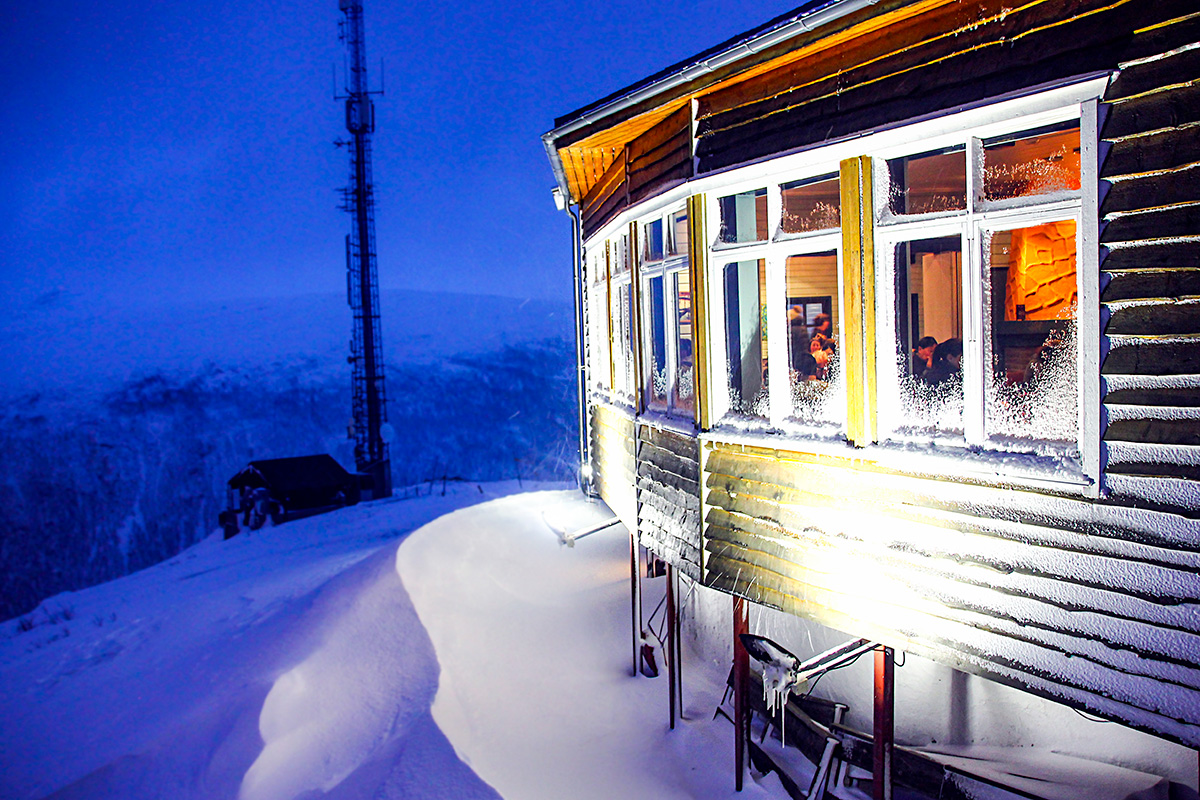 Our second and last full day in Tromsø we’re spending having a whale safari. Eventually we enjoyed this six hours trip because of views of surrounding areas, but whales and orcas, well… We saw them from a long distance and they didn’t emerge to the surface too much. We’ve seen a very little but I guess we were also victims of too high expectations. But that’s okay, as we still have our last night ahead and the third chance to see what we came for to Tromsø – I think. 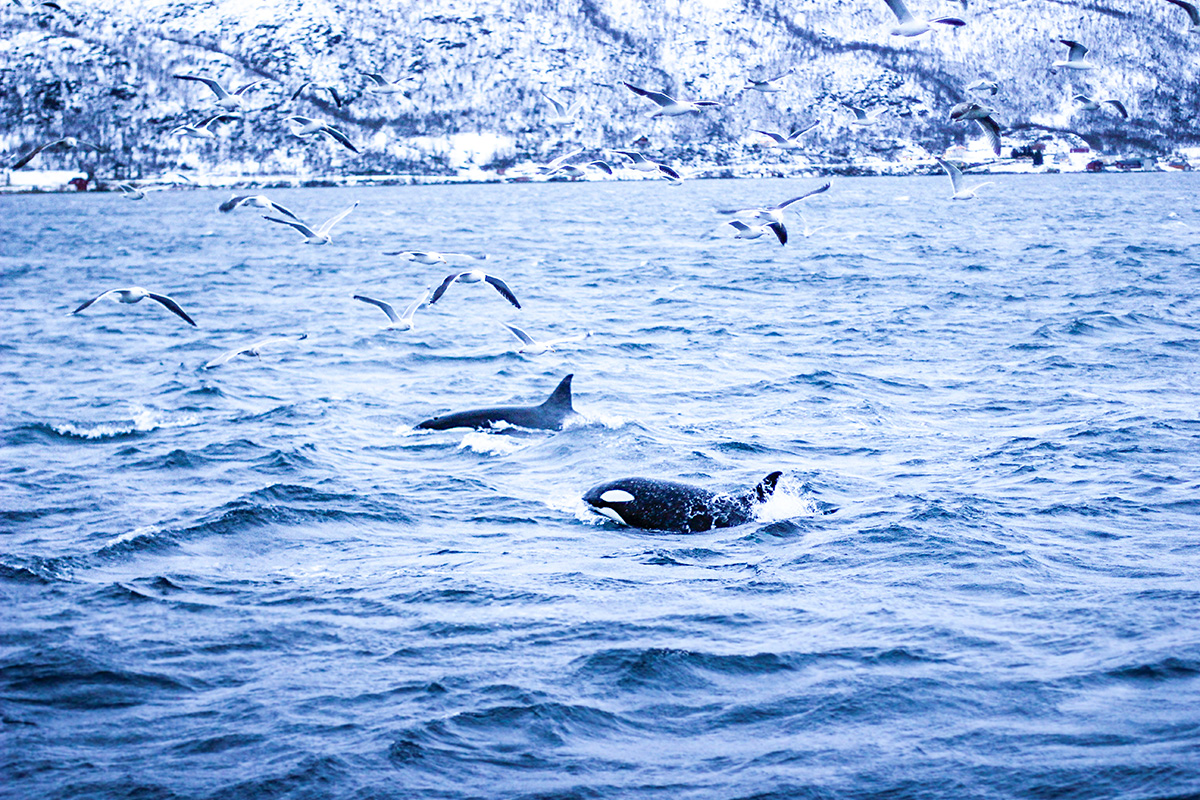 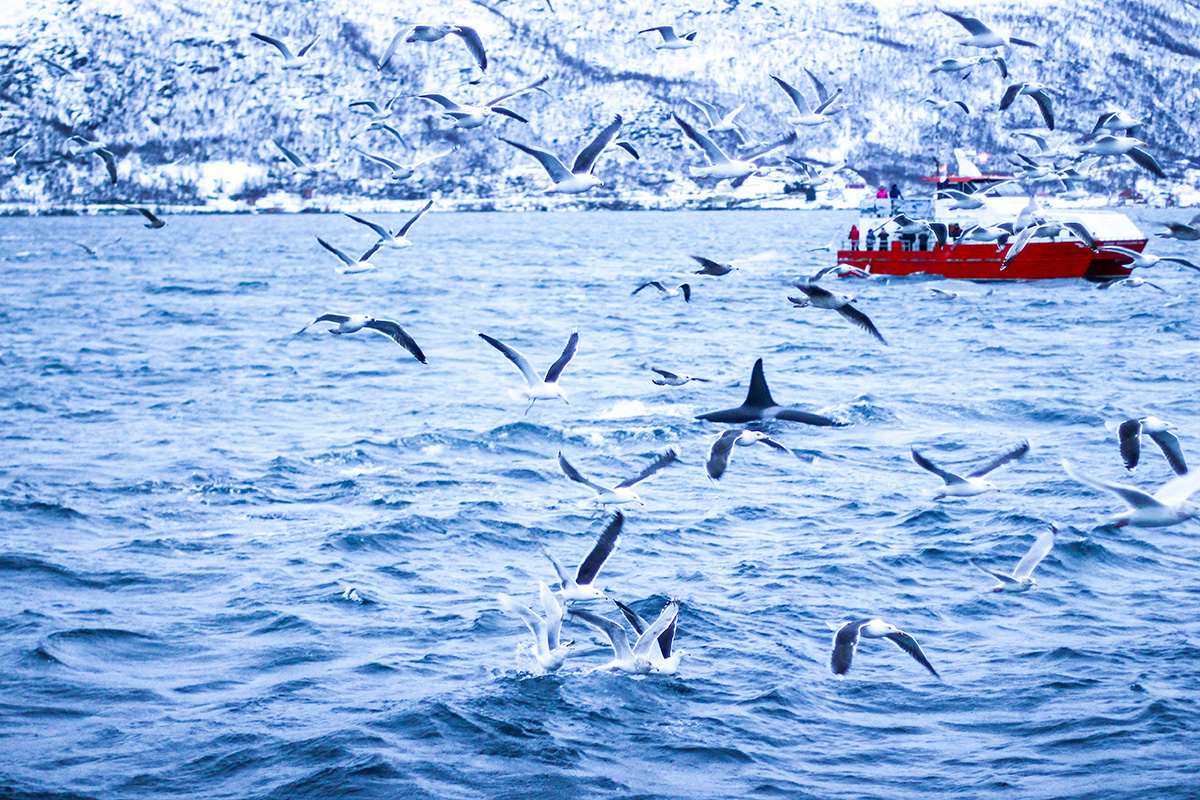 This takes us to the moment where we’re spending almost one hour freezing our asses off around Lake Prestvannet, which is arguably one of the best places to see Northern Lights in Tromsø. It’s actually not that cold, probably around 0°C. That’s the problem – with temperatures way below zero there’s usually a big chance to have a clear sky, but since it’s too warm we see nothing but clouds. We give up for now and decide to come back to our accommodation to rest. The weather forecast is promising, as they’re expecting to see some sky that night. We nervously check outside every few minutes until we notice some clear spots and stars in the sky! We put the clothes on us in a rush and go to the lake, which is about a 15-20 minutes distance. Unfortunately the spots are gone again. But no, we are not ready to give up, not yet!

Never Give Up Your Dreams!

About 45 minutes later the clear spots are back and we see something green. Or maybe blue. Is it aurora borealis? A reflection? Our imagination? We’re not sure. Few minutes later we see the real Northern Lights for 3-4 seconds and we know straight away that we should move to have a better view. Walking at night on snow around the lake is challenging. Fortunately 15 minutes later my dream finally comes true. After almost three hours of trying, on the very last day, just 8 hours before we need to be at the airport…

The clouds are suddenly opening to one big and few small windows and we can admire the Northern Lights for about 6 to 8 minutes! Firstly they’re weak. Then slowly getting stronger and start moving like waves in the end, before the clouds close again. It’s really hard to describe this feeling! I’m so happy! My eyes are full of tears. I’m glad that we stayed here and were lucky enough to experience this incredible show. I always say: Life is short so catch your dreams! And I did. 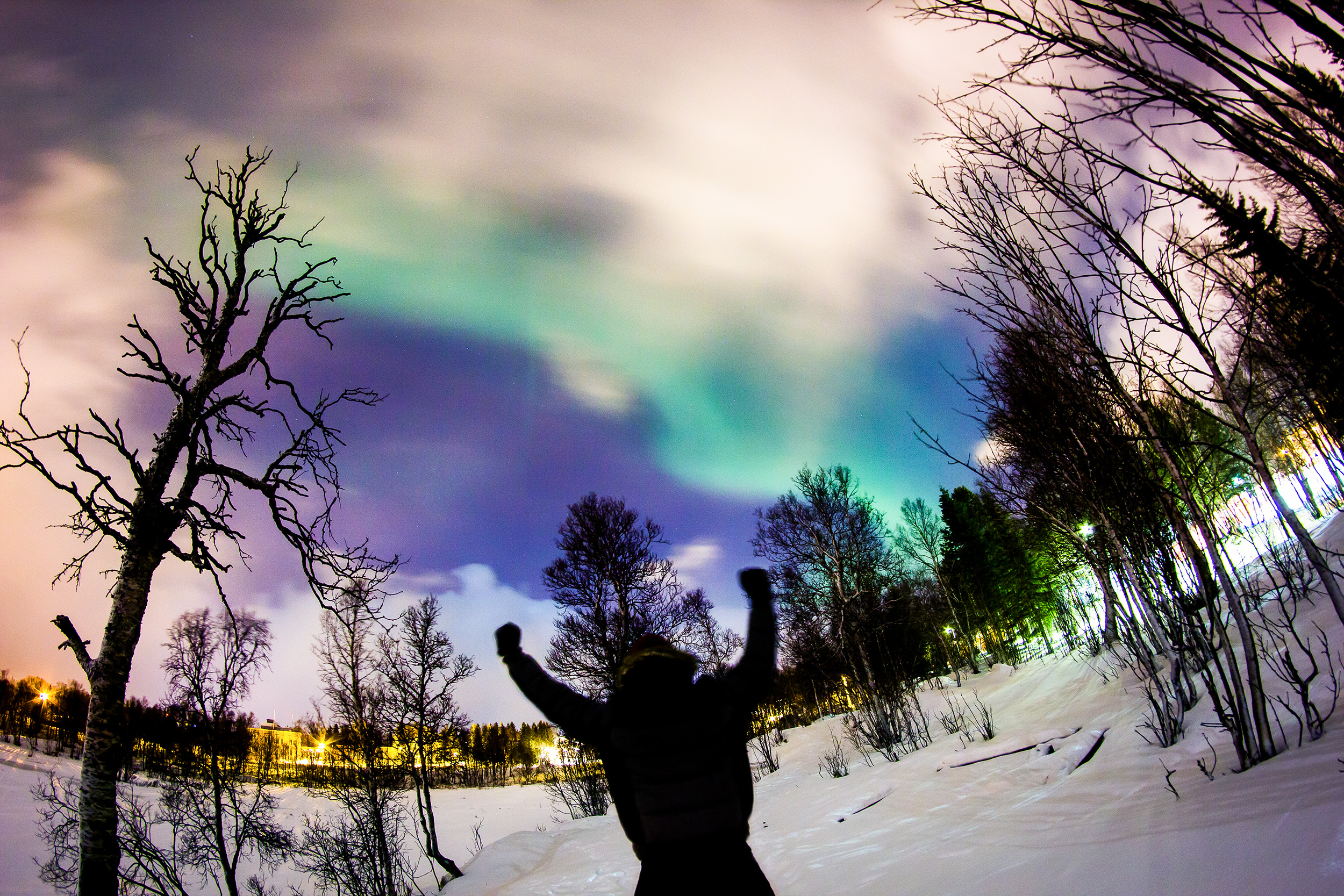 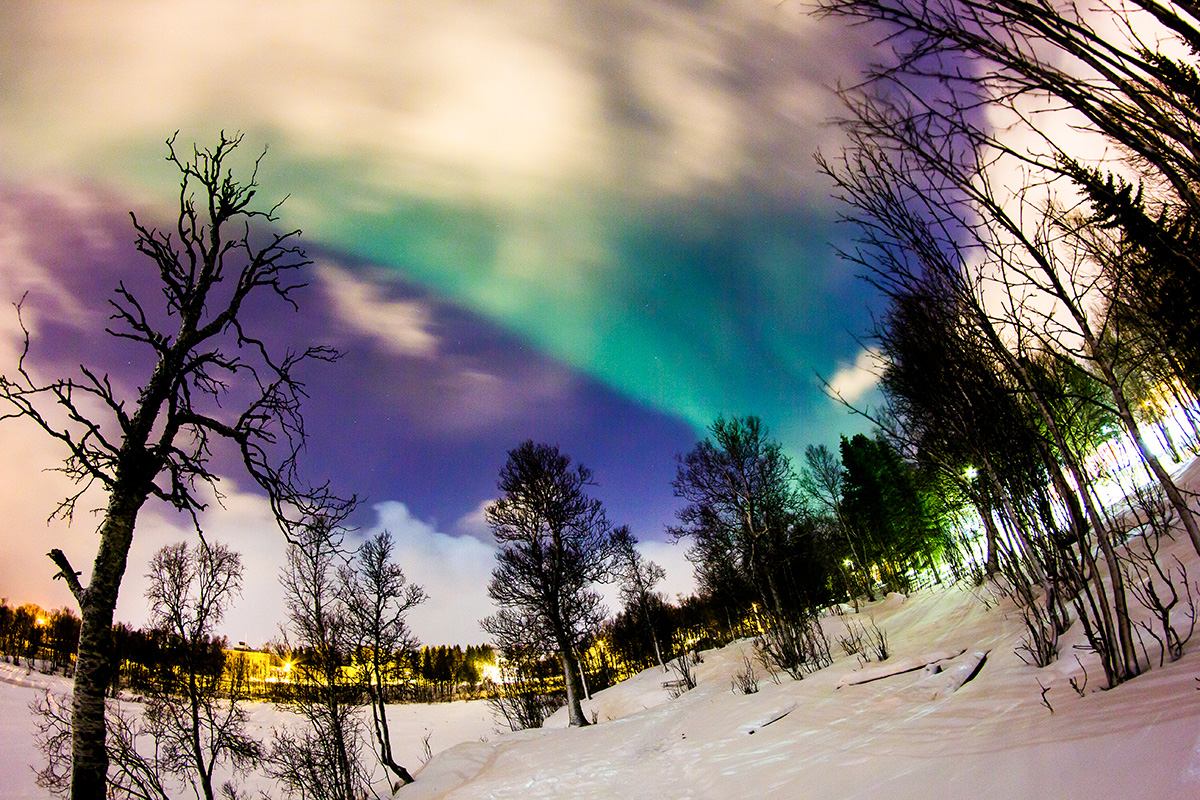 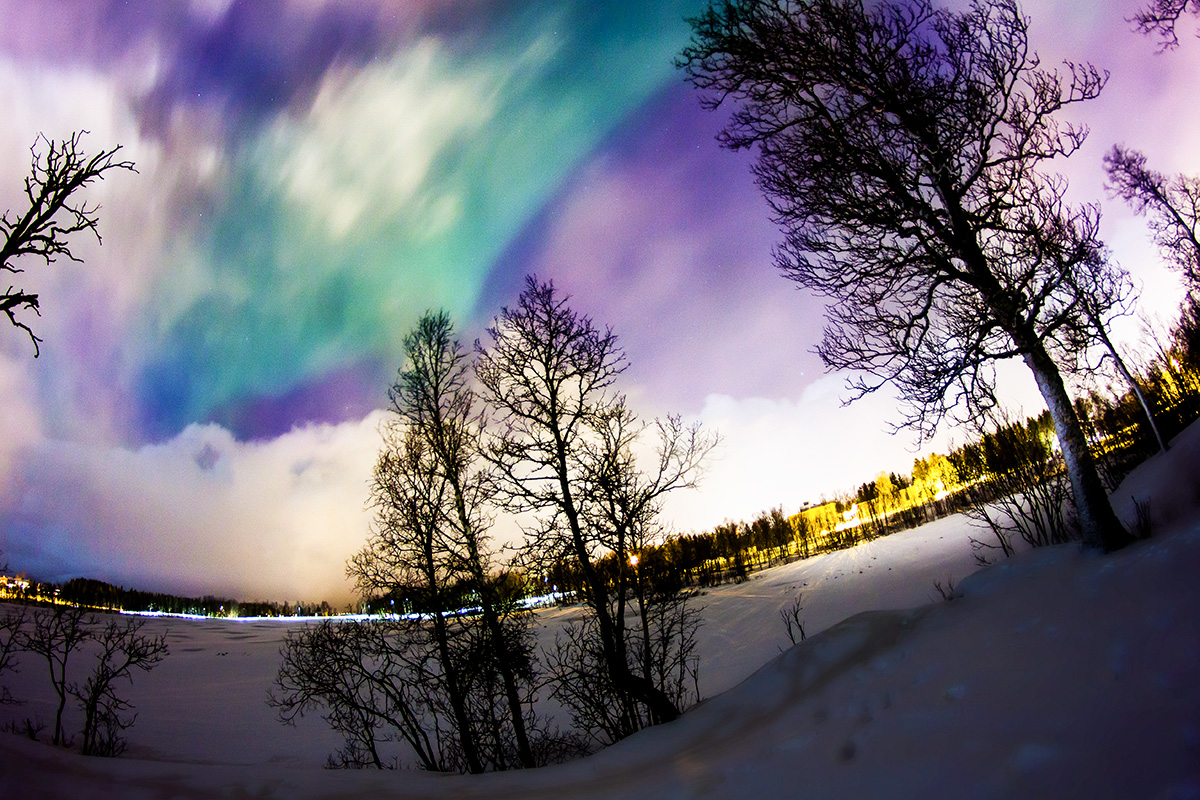 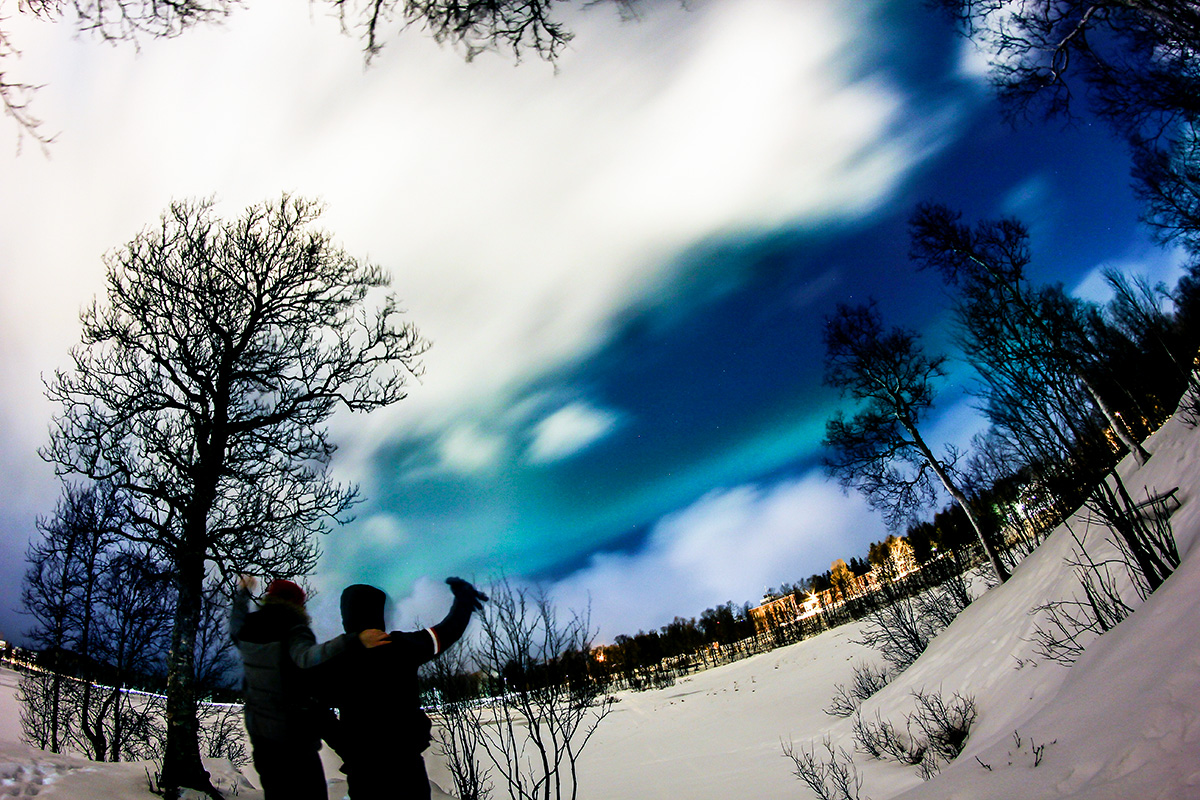 Northern Lights in Tromsø, Norway
At home I’ve read the Northern Lights that night were only type 3 out of 10, but it didn’t matter for me. I’ve been there. I’ve seen it. On the very last try. Together with one of my best friends. During the beautiful, magical winter in Tromsø. Nobody will ever take that feeling away from me. The best picture I took is on my wall now and cheers me up everytime I look at it. Maybe someday I will see a stronger Northern Lights somewhere else? If not it’s fine, as my memories from Tromsø will not vanish quickly like the amazing Lights that night.

Did you like it? Please don’t forget to sign up to my newsletter to avoid missing out new articles! You can also visit my Instagram for much more pictures, trip ideas and other stuff. And if you appreciate my work, why don’t you buy me a coffee? 😉